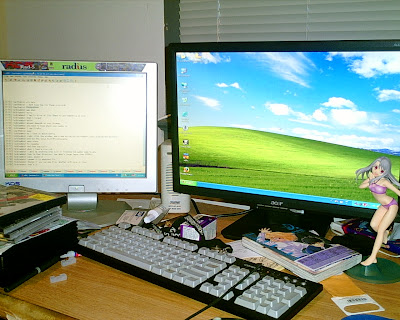 Out the new computer.
Holy crap this mouse is sensitive.
And this monitor is HUGE.
I feel humbled.
Posted by Sibby at 2:44 AM 1 comment:

Two things.
I finally ordered all the parts to my new computer early Saturday morning (like 1AM).
Second, I had to work 7pm to 5am Saturday-Sunday on a server upgrade and then drive home in freezing rain/snow/hail mix.
Posted by Sibby at 1:19 AM No comments:

Cockslapping the Mona Lisa would make an excellent band name.

It's been a while since I've found a bitter shell of twisted humor as great as the Escapist's Zero Punctuation.
Starring a Brit living in Australia so named "Yahtzee" after his parents lost a wager in said game; Zero Punctuation is a collection of rather random rambling video game reviews.
It is also awesome.
Unless you're a prude.
Then you'll probably get offended.
Posted by Sibby at 3:34 PM No comments:
Labels: games, humor

Note to countries, do not put polls for new national flags on the internet.
Or if you do, do not let foreigners vote on them.
Otherwise you get some funny designs winning.
Posted by Sibby at 4:11 PM No comments:
Labels: gurren lagan, humor, wales

I got 7th out of 32.
Not bad at all, considering when you look at the people above me.
Then again I had a comparitively easy bracket:
Lord Knight -> Arlieth(l) -> Capps Indigo -> KenmastersX -> Chibi -> Choco(l)

I knew brandon would do really well, I just didn't know how well.
It was sort of weird, cause like he was one of the first netplayers I ever truly enjoyed playing and respected, that and he's the only CL I ENJOY playing.
We played zero casuals however, mainly cause I was sort of dead tired every time we had a chance.

I took a match off Arly, and I'm sort of annoyed that I lost, even though he's the best Nero in the USA and the best native player on the West Coast (kijea and nerina are exchange students) and I've never fought Nero.
I know that matchup is stupidly in my favor, 236a and teleports all day.

I know Zar really wanted to MM brandon after the tournament, as did Sp00ky.
They were both out for blood after teams the previous day (which ended up as basically brandino fighting Arlieth's team 10 times or something as Lord Knight kept scrubbing out.)

XAQ seemed pretty sad faced the entire day haha, not sure why.
He eliminated sp00ky but lost to Zar (Standard).

Choco is like the first Satsuki I ever played since version PC came out, I took one round with 5C before he ran a train on me and I got utterly confused.
Should have stuck to the plan (play it safe, ring whore all day.)

I still can't beat sphyra's Hisui, our casuals were like 18-1.
He sent Sp00ky to loser's second round.
He's really formulaic, but so am I, and his formula completely shuts down mine.
Not sure why he stopped blocking XAQ's overheads though (Arc's are slower than Warc's!)

There are quite a lot of people below/equal to me in place who would have ended my run really early too.
Zaeler is STILL FUCKING RANDOM.
Fighting Chibi was ugly, as always.
I always forget how to play when I'm against him.
Hnana was raping me in casuals.
bell was being mean on commentary and calling out my moves before I did them.
"YOUR SHIT IS WEAK!"
Sp00ky is a lot lower than he should be.
Dippy is also a lot lower than he should be, but he fought hnana, and I probably had a worse chance than him against 2aaaa Sion.
Finally, Lord Knight continued his scrubouts by losing to me (orz) and then getting eliminated early. :V
He's good, you can have momentum for 3/4ths of the match with Vakiha, but all it takes is 3 combos to die.

Anyway, pretty damn good for my first Major.
Mad slops to Philly for being an overall hole and people getting their stuff stolen all around me. (Hyperhal lost a ps2, ipod, a NGPC!?, and his clothes, Brandon lost his cell, SK lost his PSP, etc etc the list goes on. Myself, I'm a paranoid bastard because of the clowns I live with, so I made out all right.)
Still, definitely coming back next year to this hole.
This tournament honestly revived, or at least injected a shot into our little scene.
Posted by Sibby at 10:24 AM No comments:
Labels: MBAC
Newer Posts Older Posts Home
Subscribe to: Posts (Atom)
Follow @sibladeko