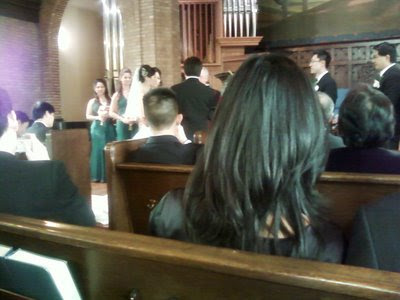 To Anna and Allan for getting married!
Unfortunately shitty phone camera pictures only, you'll have to go to Facebook to find people with real cameras.

I feel sortta bad that I took probably more pictures of crawfish. 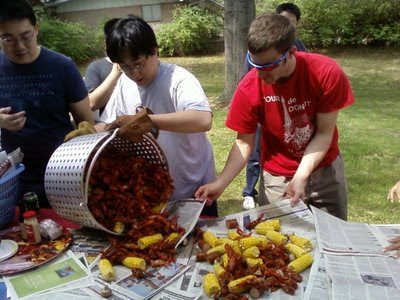 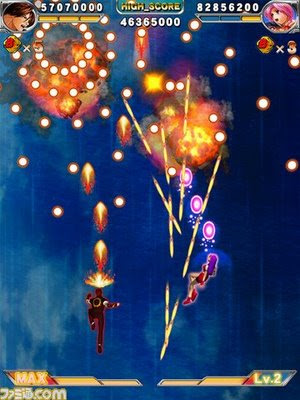 He's shooting fire out of his face!
Posted by Sibby at 11:21 AM 2 comments:
Labels: KoF, SHMUP, what

Besides Heartnana winning his SBO spot, several other big things were going down.
The 4 round gamestop tournament finals were held, anyone expecting Justin not to win that arcade cabinet left disappointed.
In the end it was JWong vs Mike Ross, Justin being pretty rude haha and getting in Mike's face after destroying him 4-1.

On the Texas front, team Fubarduck sits and watches his teammate win everything won SFIV SBO qualifiers. (He literally didn't have to play a game.) SK got second in a five person Tekken 6 BR tournament el oh el while Fubar got first. Pozerwolf won Arcana Heart 2 Suggoi!! 2.6, man I should have gone...just wedding this week.

On the non San Francisco non Arcade UFO front, Sabin got thrown into the losers during Digital Mayhem, clawed his way back to the finals, beat Nestor's Sagat into the ground with Sim, then lost to Nestor switching up with Viper at the end. Guess Japan is right in rating Viper a bad matchup for Seth. Also, Min (he's alive!) and DS tied for fifth. 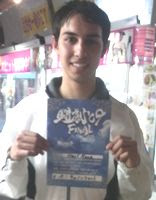 Long story short, he qualified for BlazBlue SBO while in Japan!
Not using the foreigner qualifier.
Posted by Sibby at 1:33 PM 1 comment:
Labels: BlazBlue, tougeki 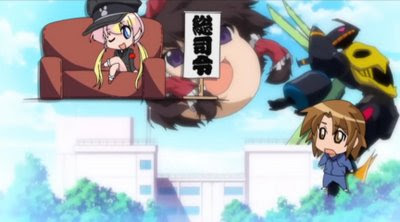 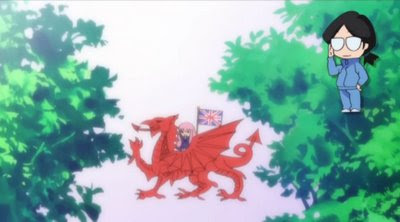 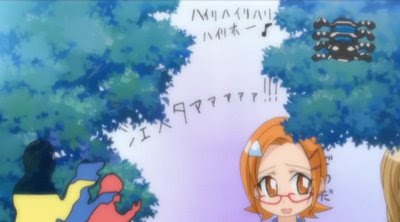 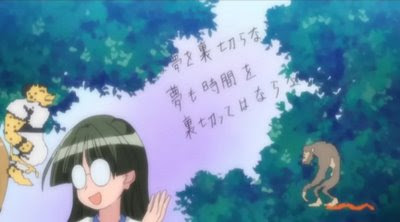 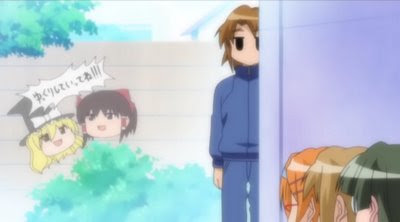 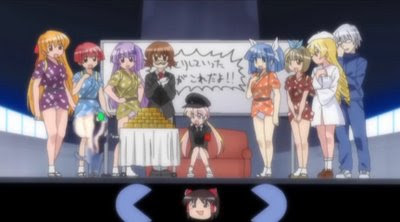 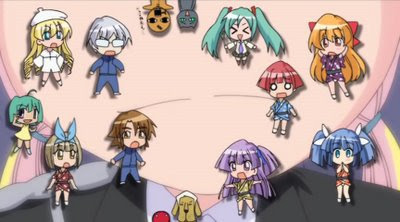 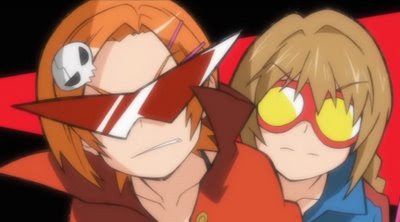 So I actually watched the thing.
It was amazing.
Was rooting for Serizawa the entire time.
Posted by Sibby at 6:35 PM No comments:
Labels: anime, humor, Pani Poni Dash, what, Yukkuri shiteitte ne

Old news but Famitsu announced it, said August 8 of 2009?
Ecole is doing it, but considering how much they fucked up AH2...
Then again MBAA is still running on Naomi hardware lol it should have no trouble.
Also Ryougi Shiki sighted as hidden character. 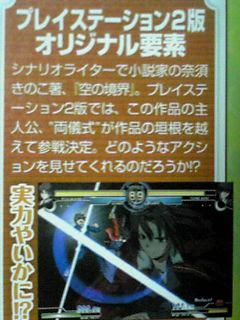 Posted by Sibby at 2:37 PM No comments:
Labels: gaming, MBAA 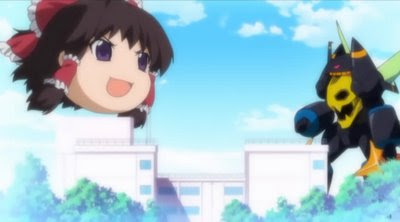 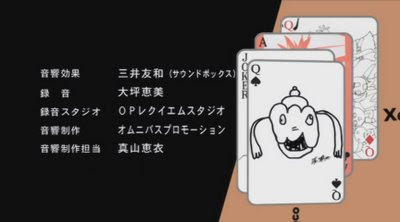 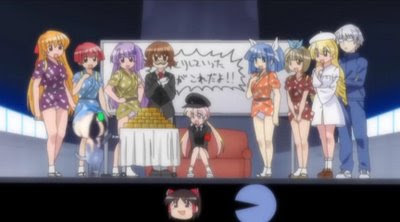 Art was only half-joking when he said he was thinking of filing that Youtube notice to take it down.
He wants to hide the tech for Evo.
Posted by Sibby at 2:26 PM No comments:
Labels: Street Fighter 4, youtube

No, this isn't the PC version.
This is the game running on an emulator, specifically PCSX2.
My computer itself is a q6600 with an 8800GT and 4 gigs of RAM running XP (yeah yeah I already know there's RAM being wasted Vista sucks blah blah)
You know it's bad when it runs better on an emulator than the console it was intended for.
The slowdown is almost completely gone.
Too bad it doesn't save the port, why the fuck should you need a beast PC to get normal playing speed?
At least I can go into training mode and do combos.
Then I'll just wait till Examu goes bankrupt or decides to do a PC/PS3/360 port.
Maybe they'll see some backlash from the locals after the travesty they released.
Posted by Sibby at 5:53 PM 2 comments:
Labels: Arcana Heart 2 Sugoi, computer, emulation, playstation 2, rant

Arcana Heart 2 SUGOI! PS2 is out

And it is the worst port I have ever played in my life.

Seriously way to fuck up Examu/Ecole.

Small summary of shit that is wrong:
WHAT VERSION IS IT?
2.5? 2.6?
It has little bits and pieces from both, though it's probably closer to 2.5 than 2.6.
Lots of changes are not there, some are, it's really a mess.

SLOW DOWNNNN AND KICK HER WITH YOUR ENERGY LEGS!
The video above shows basically the AVERAGE frame rate when trying to play with Petra.
Catherine is just as terrible.
Lilica almost the same.
There was already a ton of hitstop in the arcade version, but now, if you super someone?
Holy shit prepare to wait 2x as long as it should take, good luck timing anything.

SOUND CUTS OUT EVERYWHERE
I honestly don't really care about this, hell I'd have been all for removing the music completely (even if it is awesome) if it'd help the game speed.
As it stands, anytime shit is going on (supers, certain character moves, existing), the sound will randomly crap out.

UGLY DITHERING TRICKS
Perhaps in a futile attempt to save the speed, the game COMPLETELY dithers the shit out of the sprites into crap land constantly when they are in motion.
It also has the effect of flickering the life bars.
In short, there are TONS of single stills of just terrible terrible shitty 16bit looking sprite work.
And it's still slow, so it didn't help jack shit.
Posted by Sibby at 11:38 PM 1 comment:
Labels: Arcana Heart 2 Sugoi, gaming, playstation 2, rant

IaMP is not hard 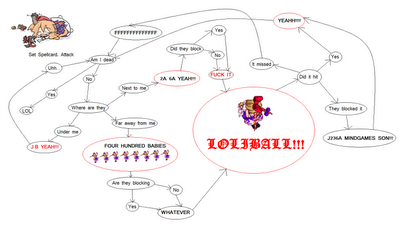 That's me I'm the loliball.
Posted by Sibby at 12:12 AM No comments:
Labels: doujin, gaming, humor, IaMP 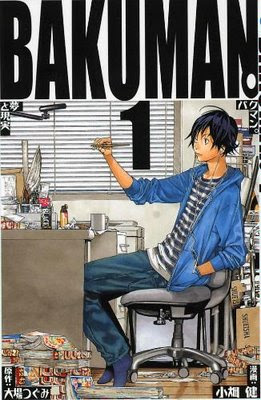 It's about 9th graders!? who want to be mangaka.
There's something so hopelessly romantic about this manga that it hits me pretty hard.
Posted by Sibby at 11:50 AM No comments:
Labels: Bakuman, manga
Newer Posts Older Posts Home
Subscribe to: Posts (Atom)
Follow @sibladeko