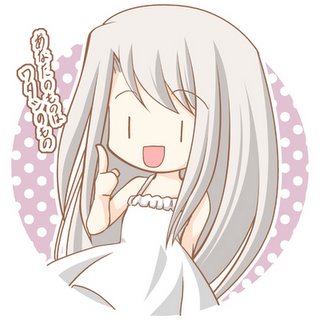 ANYWAY, Fate Stay Night 4.
Shiro gets squashed by Berserker.
Illya, being the good imouto she is, withdraws after squashing Shiro.
Leaves Rin and Saber alive, isn't she a nice girl =D
Shiro magically starts healing (cough, his powers are not magically healing, they're different, but you'll see.)
Anyway Saber goes normal clothes and warns against jumping in front of Berserker swings, then she goes into the mode Saber is well known for...completely starving Saber.


Rozen Maiden Traumend 11-12
Behold, the guilty pleasure I kept hidden from people all this time cause it was silly.
Second season of Rozen Traumend end.
Well, let's see.
I think this is best summed up in, "WTF? WTF WTF? NO. NO. FUCKING NO! She DIDNT! IVE BEEN TRICKED. Deus ex machina. Season 3?"
Suiseiseki forever.

Shana 16
One word.
AWESOME.
Damn, I'm glad I waited till I was coherent to watch this, otherwise I'd have missed all the juicy subtelties.
FIRST OFF.
Shiro aka Merihim is bad ass.
Second off.
Wilhelmina liked him.
Third off.
LOVE TRIANGLE POSSIBLY MIRRORED IN FUTURE? (Volume 10 of novel goes into the backstory, I'll make a serious effort to read it.)

Random analysis time.
When Shana/Alastor first meet Yuji, they mentioned that Mistes can change into Tomogara.
Merihim is a bad ass Tomogara, and he and the former red haired flame haze (spoiler: Matilda) loved each other, but fought each other in the end it seems (I think he fought to keep her from destroying herself through Alastor's oath).
Wilhelmina was...friends? who knows to both.
But she liked him, if you see that flashback and her comments.

I can see this triangle being MIRRORED in the future, considering the tuner shounen finally shows up seeking Misaki.
And I can see Yuji becoming a Tomogara on purpose to become stronger.
I hope Shana doesn't go blow herself up though.

Allan finally got the Shuffle! ending theme out of his head...
Only to be replaced by the Fate Stay Night ending theme!
Hence the title of this post.
Unfortunately the ending single is not out yet, zannen da yo (too bad).

Anyway, spoiler time cause I can't hold things in.
So far the anime is following the first branch, Fate.
That is, Berserker is the largest immediate threat, as opposed to Caster or True Assassin.

ANYWAY, Rin has ten of those red pendants that basically function as a decade's worth of mana.
She used the one her father gave her on Shirou, which explains her apology.

That's all for today. 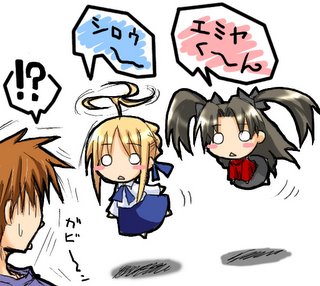 So here I am at fakey work (read: volunteer) for a tech school, completely bored out of my mind from data entry .
When will the damn computers come in?

There is a student here who has spent close to three hours looking at...the Stop and Shop homepage.
The mind boggles at how he can view a supermarket's homepage for so long.
Maybe it's the...completely sparse interface or the blue confirm button that's keeping him so enthralled.

Also, I've returned to private server Ragnarok Online (oh noes), specifically Soojin's private server.
1000x base exp/1000x job exp/50x drops, max level 254.
Uh yeah I already have two level 254s, someone has to quickly remind me that I hate RO again before this goes too far.
It's funny how I can't resist gimpy competition, no matter how stupid a medium (an MMORPG).
I have a feeling that one of the main reasons for me disliking one of the FOUR other players or so on the server is that he is the only other one with a level 254 (he would have been first, but I ninja leveled during supposed down time) and he is the only one who has remotely any idea how to play.
Then again, it could be because he's a hypocrite and an idiot.
Ah well, he's not so bad I guess.

Now as for that kid who abused his beta GM account by giving his legit character massive amounts of items and who InSiStS oN tYpInG lIkE tHiS...that kid has to die.
Now.
I am surprised he was allowed to stay at all, cause holy CHRIST is he a stupid fucker.
Now he just asks noob questions 24/7 and makes names like EdWaRd_ElRiC.
Fucking Toonami generation.
Posted by Sibby at 12:29 PM 1 comment: 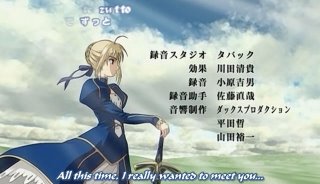 Key points:
1. Faithful art style.
Tsukihime's anime style weirded me the fuck out.
All the voices were also...not from Melty Blood, which I honestly thought did an amazing job.
So I was unsure as hell about it and couldn't exactly stand it for long.
Fate Stay Night's art style seems extremely faithful, this is good.

2. Faithful story?
Herein lies a dilemna.
Ok, it's started out faithful (Tsukihime did too.)
But it took Tsukihime like 2-3 episodes for people to realize, WTF no reversed Shiki, lame.
Fate's main character, Shiro, wants to be a champion of justice, that's actually his sort of naive goal.
The thing about Fate Stay Night is that it has three paths.
And in each path, there are people Shiro just can't save.
In the first two paths, Shiro chooses the path of a hero anyway and tries to save as many as he can, but in the third path, Shiro chooses to protect one person above all else. (And thus the most amount of people die.)
It varies from path to path, but these are all people Shiro cares about.
Plus, his allies are different in each one. (Except for...Rin. Such a good girl =D But come on you guessed that already right?)
There is a fan disc called Fate Hollow Atarxia, which is basically the sequel to Fate Stay Night, IF some magical happy ending existed where everyone lived.
I wonder if they're going to try for that.

3. Characters seem faithful, but what's going to really matter is how they change (again see above about the story paths.) Rin'll smile more, Archer will stop thinking everything's useless, Shiro will get stronger, Saber will get cuter, Lancer won't be as homicidal, Illya will be nicer, Rider will be nicer, who knows?

Anyway, episode 1 starts out slow, but episode 2 speeds up quite a bit (He finally summoned his servant).

Meanwhile, Shakugan no Shana has slowed down again, this time going into Shana's past.
Maid ribbon Wilhelmina introduced ~de arimasu, cough Yuji will be getting a new addition to his household soon (cough complications DO occur later, as Wilhelmina isn't as kosher with Yuji as she appears), but yeah I really wonder if they can do this series in 26 (more seasons I say, don't try to compact it).
Wilhelmina rules however ~de arimasu.
Maids always do. 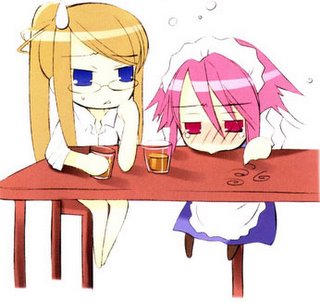 Cough, dirty little secret time.
I slowed down some of the stages in Touhou to unlock higher levels when things were looking absolutely grim.
I went back and did most of them, but still 8-3 and 9-2 remain with 67% slowdown XD
HOWEVER, I did reach level 10 legitimately (three level 9's that weren't 9-2 and that weren't slowed down), so I'm happy as hell now.
Only 22 fucking more stages to go till extra. 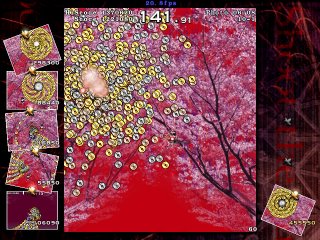 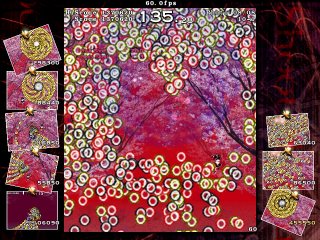 I watched 13 episodes of this show in a row.
It was originally a novel with some illustrations, then a full manga, and now an anime.
It's a good complicated plot, really nice characters, lots of good development, and pretty battle scenes.
However, there is one thing about it...
The main girl is lolicon bait.
Like she's I don't know, ageless?
But Christ the creators really know what they have, they basically have the perfect Otaku definition of "moe".
Shana is so moe that it's almost impossible not to notice it.
I can't ignore it either...
I mean hell the show has so many OTHERS merits, but the writers go that one extra step which I guess approaches fanservice.
And so you have mizugi Shana, or sukumizugi Shana, or kimono Shana, it's ridiculous.
She's still a great character though, and that scene where she flips out and starts screaming at a girl who's already frozen inside the field was amazing.

Nani su no yo!!
What do you think you're doing?
Nani jyama siten no yo!!
What are you interfering for?
Sugu ni kikaseteyaru! Watashi no kimochi o,
I'll let you hear my feelings right away!
Omae nanka, zenzen, Yuji wa, watashi to, zutto, motto, takusan arun dakara!!
You're nothing. There's much more between Yuji and me!
Omae nanka ni, zettai ni makenai!
I'll never lose to you!
Zettai!
Never!
Makenai!
I'll never lose!

Magazine Scan
My bad, not just an OVA, my ghetto Japanese rapes though.
Posted by Sibby at 10:09 PM No comments:

No I'm not, but godamn it feels good to get to level 8.
Vids of level 7:
Youmu's easiest card. Trust me, the rest of hers are ridiculous.
Ring around the Remilia ^^
Remilia rose
Time stop!
Pictures of level 8: 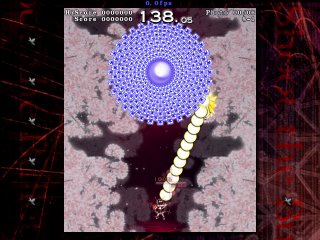 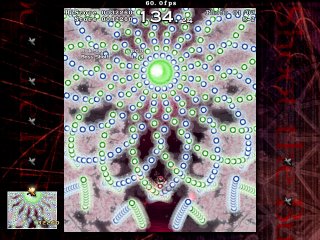 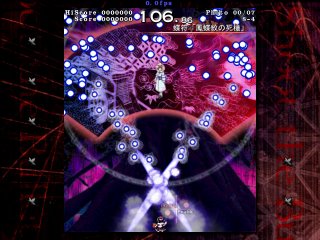 Wasting lots of time on Touhou 9.5.
I'm using it as bullet dodge practice for when I get a full version of Embodiment of the Scarlet Devil or Perfect Cherry Blossom or Imperishable Night.
However, SOMETIMES IT IS IMPOSSIBLE TO DODGE.
I'M LOOKING AT YOU TWO, ALICE AND PATCHOULI. 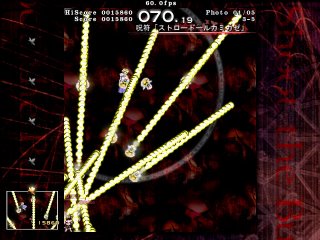 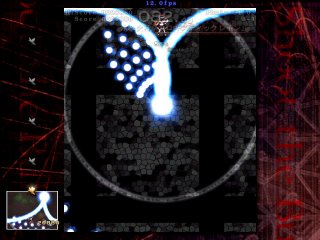 Oh yeah, video of ZUN (Creator) taking down Remilia.
Posted by Sibby at 12:03 PM No comments: 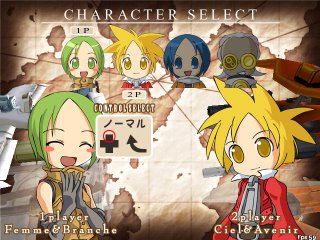 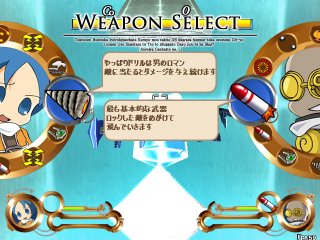 Now that I've been like fully absorbed into stupid doujin culture, I can make a post like this.
Comiket 69, in short, Comiket is a fucking huge ass convention each year right before New Year's in Japan.
This year was December 29-30.
Lots of stuff comes out from official and unofficial companies like music games comics figures whatever.
Anyway, being the savvy media pirate I am, I'm along for the ride.

Currently have:
Gunners Heart:
Cute, somewhat short, but pretty well done plane shooter type thing. Link to a demo.
RBO 2nd Scenario:
I never got the first scenario (Until today), but I'm sure certain dorks, i.e. people not me who still play RO, are going bananas over this.
I'll have to pick it up again (Made a level 20 fmage, owned everything, but never made other classes)
Touhou 9.5:
Hell I don't even have the other Touhous besides 7.5, and this one just sounds weird (taking picture of attacks? the hell?), but it's Touhou.
Touhou Remixes, like 30 of them:
Touhou music owns, and for the most part, Touhou remix music owns.
OTHERS shooters:
I don't even feel like listing them, I'll give them all a whirl eventually. One's based off Nekoneko soft, Tsukihime, Fate Stay Night, blah blah blah.
Posted by Sibby at 9:12 PM No comments:
Newer Posts Older Posts Home
Subscribe to: Posts (Atom)
Follow @sibladeko