Guess what came in the mail at work today!
I didn't even realize this was released way back in late March until I was surfing Amazon JP one day.
Good job self way to forget about this.
Here is me abusing the company scanner for completely non-work related purposes. 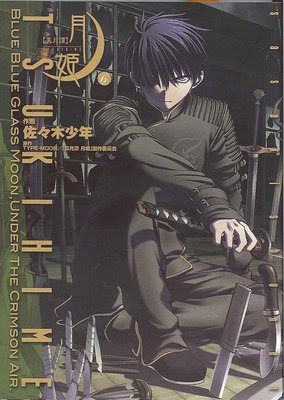 By the way Ciel vs Roa is absolutely awesome.
Even though I hate Ciel. 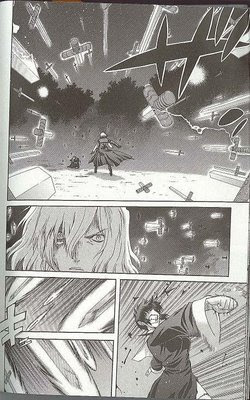 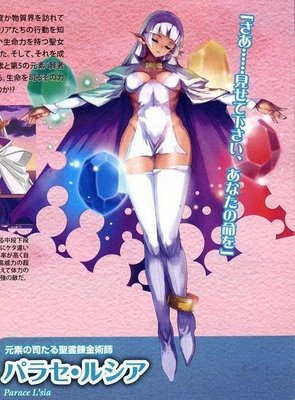 Parace L'Sia
She's a Swiss elf.
Like that means anything. 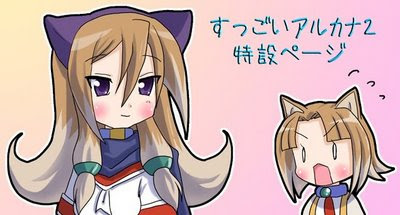 Wakka Wakka
Posted by Sibby at 9:47 AM No comments:
Labels: arcana heart 2

I'm only posting about this because tomatoes are my favorite food :V
But yeah, purple tomatoes.
Posted by Sibby at 12:08 PM 1 comment:

A bit too realistic... 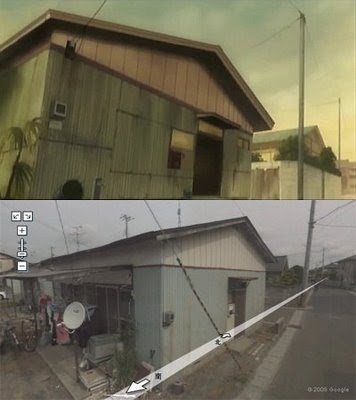 This link basically takes a shitload of comparisons between the anime "Kannagi" and the real life town it is based on.
Hell, you can see Kannagi's run down ass house if you click, though the originalpost has censored the initial google screenshot preview. (I've uncensored it here)

I remember thinking that it was really cool that Hinamizawa/Shirakawa was a real town.
But lately it seems more and more anime aren't even bothering to think up their settings, they just go to a town, photograph it, then draw the photographs, or even photoshop directly over them.
Maybe it helps people connect to the anime more.
People in that town anyway...(and for the people of Lucky Star town, milk it for all its worth.)
It sort of smacks to laziness to me though.

There's a LOT in this flash, so some things you should know.
Playing Scarlet Weather Rhapsody should also help a lot, a lot of SWR-related things show up.

The "top" here is literal, as Tenshi is a celestial and basically lives up in heaven.
She's not that smart though =D.

Cirno is actually doing her easy mode spell card during the chorus of bakas.
You know, the one where you can sit right in front of her and never get hit.

Iku's Saturday Night Fever moves are pretty known by now, but yes she makes that pose to call down lightning.

Cirno's math problem goes something like this:
3 people get on the Touhou bus at Scarlet Devil Mansion, one gets off at Hakugyokurou, half a person gets on (Yuyuko is gnawing on the other half), 2 people get off at the Yakumo's house, how many are left?
The answer is zero, because there are no buses in Gensokyo.
Cirno does the Ranka Lee (from Macross Frontier) kira kira pose here before being run over by Yukari's train super from Scarlet Weather Rhapsody.

Patchouli's initial book reads "dameido", a pun on dame, and also a VIP copy pasta thread.
Basically a very bad maid.
Patchouli's book when she gets off reads "hetare shu", or useless master.

The drinks Reisen gives Cirno are from her power-up super in Scarlet Weather Rhapsody, they're made by Eirin.

This part I'm unsure of, but Cirno says she can't understand time but doesn't care because the round-eyed god (but nothing round here) says the three hands mean nothing.
Sakuya does her counter move from SWR, which of course is parodying Dio from Jojo.

I don't know what Cirno's paper says yet.
Keine's blackboard seems to be...a list of missions from Earth Defense Force 2017 (Notice the giant bug), a rather popular game on nicovideo.

Of course, Yukkuri siteitte ne is what is said during Keine's headbutt.
The Knockout graphic is from Scarlet Weather Rhapsody again.

Ends with another Saturday Night Fever Iku, cept the lightning comes down this time.
Posted by Sibby at 1:30 AM No comments:
Labels: Iosys, music video, Touhou

aka why am I watching anime again?

Index is ok.
Kannagi is making me laugh out loud a lot, Nagi is just too weird to not appreciate.
Sort of reminds me of Yukiko =O
Macademi Wasshoi or whatever Ken was recommending is eh, pretty average.
Time to dl one episode of Nodame whatever French it is.
Posted by Sibby at 2:07 PM No comments:

And with that said, let the stupid Kenshin jokes begin.

Also, scans from the Official Design Works.
Let's get this out of the way first:

OLD RISE who was initially a WOMEN'S GANG LEADER (sukeba) 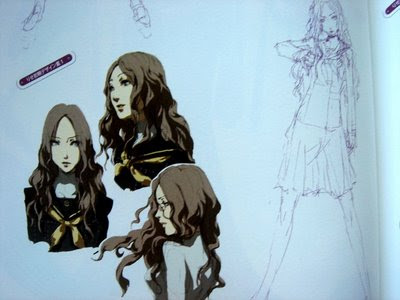 Rise after they decided she was an idol 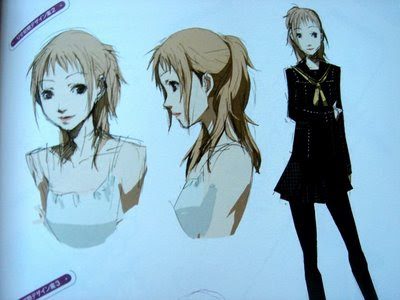 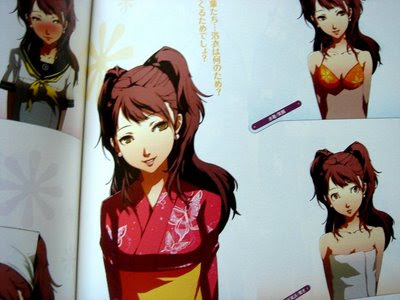 Maybe if they had made her tsundere it could have saved her. のヮの
No seriously, give me back my gang leader Rise Atlus. 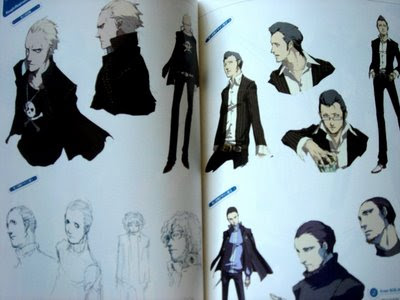 FONZ? IS THAT YOU? 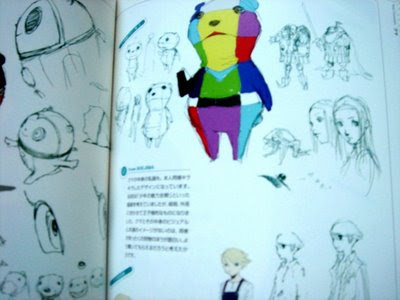 Naoto WAS a guy originally: 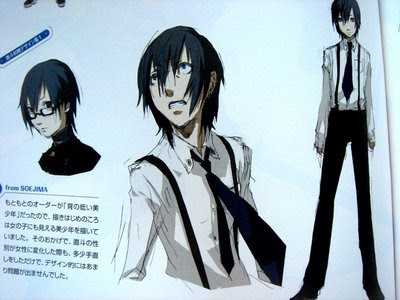 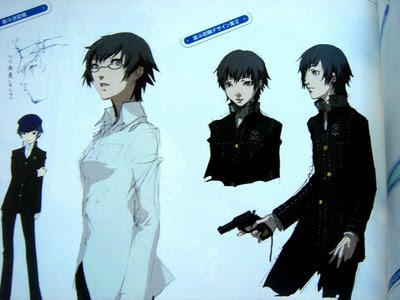 Yukiko seems to have had a short hair Aegis phase: 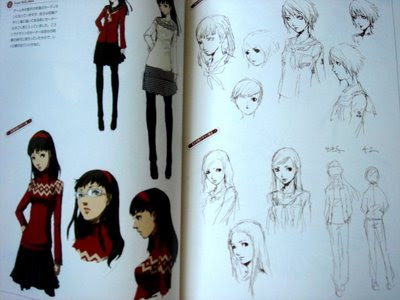 Chie seems to have been settled on fairly quickly, having only a short stint with shoujo manga Persona 3 girl's hair: 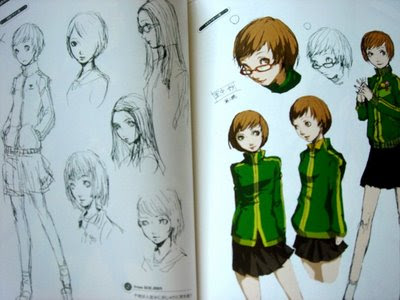 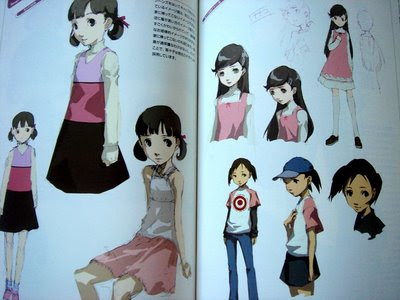 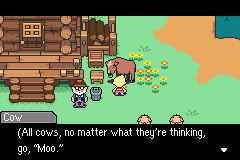 Posted by Sibby at 9:31 PM No comments:
Labels: gaming, Mother 3


If you don't have a nico account, the sum of the fight is:
Kohaku on point with Hisui assist can call her in the air, it's plus frames, and it does no pushback.
Half moon Shiki can 6AAA THROUGH SOMEONE'S COLLISION BOX and cross up from the other side.
Both of these things are stupid.

Edit: Ken just pointed out something even worse lol.
The combo counter DOES NOT STOP even after Kohaku is knocked down in the third round when Shiki combos both twins.
It keeps counting and scaling until Hisui wakes up.
Posted by Sibby at 1:51 AM No comments:
Labels: MBAA

ctohno's jC hitbox has been increased tremendously. Ken and I were getting hit by this shit all day, it was mind-numbingly stupefying. Apologies to nightwolf if we sound like haters, but we are!

cvakiha randomly scrubbed out ctohno. No clue how he pulled it off, just flying around.

fakiha has a fucking infinite off her yakuza 6b kick into flame pit. Zar got at most, 4 reps. Lots of held flame pits everywhere, shit is annoying.

faoko is sortta silly, finger shots and all, weird orb lasers, somersault is of course worse than flying i'm going to kick you, but rithli still won with it anyway.

haoko has all the broken nonsense you've seen, but it is quite hard to pull off, zar might have got the charge kick loop once and the ex orb projectile relaunch combo once in all the hours of play we had. I still took 3k off a fucking charged beam though to die.

cwarc feels very familiar. Advanced bnb is much easier to do, first jc hits like 100% of the time. Geass ring is AMAZING, shit is fast and goes full screen and is oh so good. Wish she had a normal small ring that did that :V Still couldn't quite fit 6c seamlessly into my game, I know she can do some great shit like 5b5a6c2c5c etc. now. j2c ender is extremely viable, but not sure what to do on landing, i wonder if i can air dash after it if i haven't used it yet.

fwarc is too fucking weird. jb is weird, 2b is some weird ass slide, 236 rekkas are huge plus frames, couldn't figure out her bnb

hnero is nero with a bee and more annoying. long island joe figured him out pretty quick, hoaaaaas all around PLUS A NORMAL DASH AHHHHHH. One bnb into max is sucks too :V

ckohaku is sortta crazy, a LOT of crossup hi low bullshit off knockdowns that is pretty hard to read. ken says 6c loop is much harder than it looks, he can't do it yet, just repeated 5b loop atm.

I'll have some pictures but honestly I've never used my cellphone camera before so it might be a bit before I figure out how to put them online.
Posted by Sibby at 3:31 AM No comments:
Labels: MBAA

This caught my eye because Chibi, Saiyd and Arturo still burn this game!
And DS more recently with his lame ass Raph.
But yeah the Genesis version...is quite different from the SNES version it appears.
In a bad way. 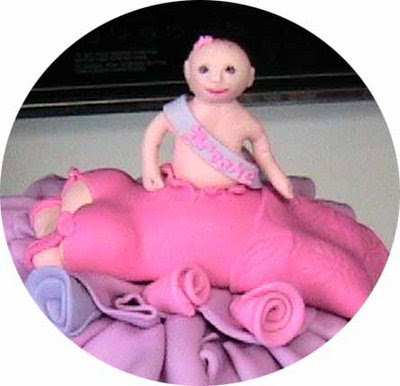 Some of the funniest confectionery catastrophes around.
Posted by Sibby at 3:50 PM No comments: 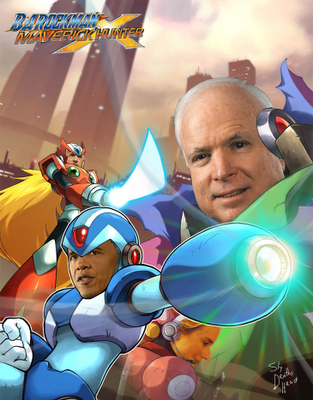 So terrible it's awesome.
Posted by Sibby at 10:31 AM 1 comment:
Labels: humor, politics, what

Teaching Science and Math with manga 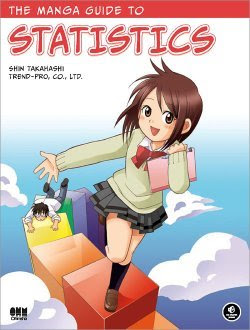 via Ars
Posted by Sibby at 9:17 AM No comments:
Labels: computer science, manga, math, what 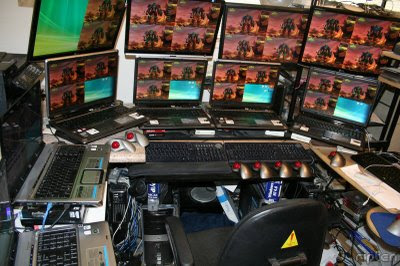 So some guy has 36 WoW accounts and attacks Alliance towns BY HIMSELF.
This is patently absurd.
Posted by Sibby at 10:16 AM No comments:
Labels: gaming, what, World of Warcraft

Who are you again? 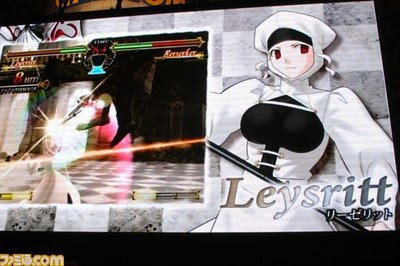 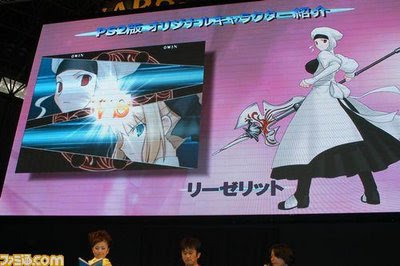 Leysritt?
Aka Ilya's oppai maid?
Mad random.
They might as well add Caren too and Avenger :V

Needs more of the character on the left. 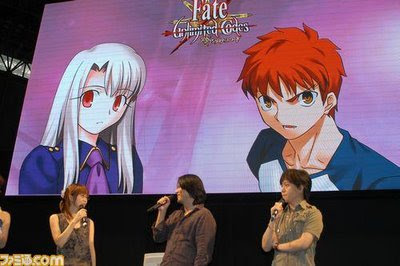 via Zepy
Posted by Sibby at 9:36 AM No comments:
Labels: Fate Unlimited Codes, gaming, Type-Moon

Square Enix is bringing its cult classic role-playing game series Valkyrie Profile to Nintendo DS, causing fans to line up for hours around its booth to play it, although they might be surprised by what they find. "The DS version is very different from the earlier versions -- it's a strategy RPG this time," says James Clark, who writes for a website called RPGFan from his Tokyo apartment.

What?
Posted by Sibby at 1:34 AM No comments:
Labels: Nintendo, valkyrie profile, what

Once again my name is Tropsy and I have no clue what I am talking about! 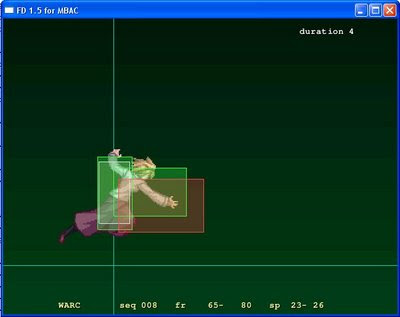 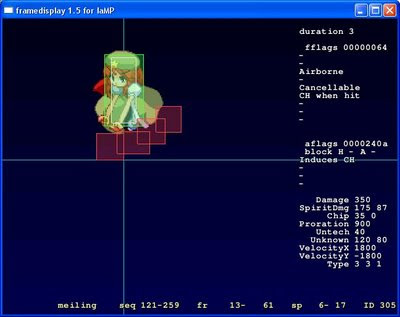 Edit: Fubar is a huge liar and his MBAA is now working perfectly.
Support Arcade UFO if you live in Texas fruits!
None of that Project Zero nonsense.
Posted by Sibby at 12:28 AM No comments:
Labels: MBAA, rant


So it's this new series about...
Oh never mind it's by the Guu people.
Expect it to be completely wholesome and make perfect sense.

Posted by Sibby at 7:52 PM No comments:
Labels: anime, Kemeko Deluxe, what

I think I just took the first sick day ever since starting work at Datalinx/Aricent.
Pretty overall miserable too, also on call and kept getting woken up out of my death sleep about users not built on FS.
Posted by Sibby at 5:20 PM 1 comment:
Newer Posts Older Posts Home
Subscribe to: Posts (Atom)
Follow @sibladeko