As you can see, these are some phenomenally shitty times for someone on the east coast!
To reiterate:
January 27th, Friday (today), 2am to 9am EST
January 28th, Saturday, 4am to 12pm EST
February 1st, Wednesday, 2am to 9am EST
February 3rd, Friday, 1am EST to February 4th, Saturday, 9am EST
Incidentally, today I slept at 6:30AM :V
And woke up at 8 to go to work.
Shhhh...

Anyway let's see:
CONCEPTS that are familiar to me from PSP2i:
Weapon elements.
Fusing weapons together to increase the element.
Upgrading weapons.
Shared storage among characters.
Missions.
Hunter/Force/Ranger.
Skill disks.
Individual drop system along with the same color coding.

New or different stuff:
Weapon mods, sort of like extra stats or perks to a weapon.
Destroying a weapon with a desirable mod to put onto another weapon.
Multi-party missions. (Seems you can link up to 3 full parties or so at once.)
Class system seems to have skill trees and builds now, I already wasted some RA points on accuracy up.
The character creation, I think I spent an hour with the 9000 sliders.

Anyway, hesitant to put vids up cause Sega might drop a meteor on all the gaijins playing.
But yeah it's pretty familiar and cool at the same time.
Posted by Sibby at 10:22 AM No comments:
Labels: gaming, PSO2

Ugh, I've started realizing that all the stupid internet links I find relatively quickly are too easily thrown into Twitter.
Help I can't stop posting stupid shit.
Posted by Sibby at 9:34 AM 1 comment:
Labels: twitter

Horizon in the Middle of Nowhere

Warning: This show is weighty.
It feels like reading the beginning of Umineko initially (lots of nothing happening, lots of characters, and you are wondering exactly what the fuck is going on.)
I believe it takes like 4? episodes to cover a single day.
Apparently the "light" novels the show is adapted from aren't "light" at all, we're talking like 3000 pages.
Here's an example for size comparison: 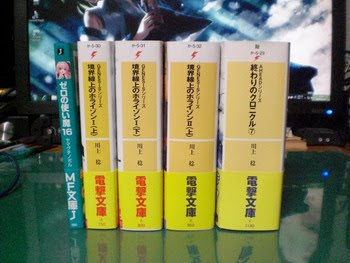 (On the left, Zero no Tsukaima "novel" 16. On its right, Horizon 1a, 1b, 2a. On its right, Owari no Chronicle 7)
That's right, same author, different series set in the same universe set 4000 years before.
Yes, there is an entire who knows how many years of history in the author's head for his universe.

Now right off the bat this sounds like a bad idea to adapt!
Can you imagine say, a Wheel of Time anime?
Because it has about the same amount of characters!
How many episodes until we actually get to Aes Sedai and aren't getting owned in a small village by Trollocs?
But apparently the creator really wanted it to be come an anime.
Like really really.
Like he made an entire 3D model of the country for the anime staff really.
And he brought in tons of notes for the staff, that ended up being something like 20+ volumes of just notes.

So going into this show I had literally no idea what to expect.
Unfortunately, terrible translations on the initial releases left me with even less of a clue (use Commie or maybe Hatena for subs, do not use Hadena).
And it was slow, almost slice of life slow.
There was something being hinted at constantly but it took a while to reveal.
Plus the series is only 13 episodes.
I'm glad I finished it though, because it feels a fresh start to something with huge potential.
Plus the main character is played by otaku Lelouch.

Let's get this out of the way now, the main character looks NOT MANLY AT ALL.
In fact he looks like an absolute dork.
But he has a lot of reasons for how he acts, and honestly at the end I felt like he was one of the coolest characters to exist in a while.
I think the best comparison is really the Umineko sound novels in terms of build-up and delivery, though it's not as troll as Umineko and the Umineko anime was done poorly.

But yeah, for extra help, if you start watching (I originally put reading here I must be tired) this show, go to http://kyoukaisen.tumblr.com/neta for some answers as well.
In short though, the basis for the world is that in the future Earth became pretty uninhabitable, and everyone else except Japan left for the stars, except it seems like they fucked up in space, so instead they had to head to alternate dimensions of Earth, however the dimensions were bound to original Earth through Japan, the sole country that stayed on real Earth.
The people then attempt to recreate the history of old earth so that it will lead them back to space (this is the main "religion," the will of the Testament.)
Someone blew up the connection between the alternate dimension sections of Earth and Japan, so all the alternate dimensions "crashed" back into real Earth, which at this time Japan owned the entire thing.
Japan was blamed for the incident, and so lost all its territories (but it makes sense because everyone's basically thrown back onto real earth, however, the Testament keeps going until the year 1648, where it has stopped (and scared the shit out of the history recreators.)
How's that for a mouthful.
And it's hard to remember or believe but yes, all the nations shown represent superpowers that existed in real Earth around 1648.
Anyway there's a lot of information to digest, but it honestly somewhat makes sense, unlike say, Index's universe, which feels sort of ad-hoc.
Posted by Sibby at 10:50 AM No comments:
Labels: Horizon in the Middle of Nowhere, Kyoukai Senjou no Horizon
Newer Posts Older Posts Home
Subscribe to: Posts (Atom)
Follow @sibladeko