It's been what, three years? 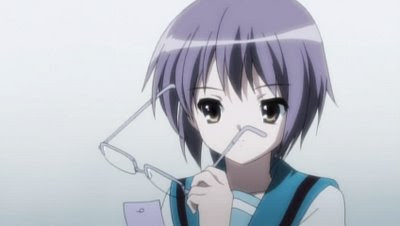 All the little touches are still there, like when past Nagato synchronizes with her present self and removes her glasses as a result.
Posted by Sibby at 9:28 PM 1 comment:
Labels: anime, Haruhi 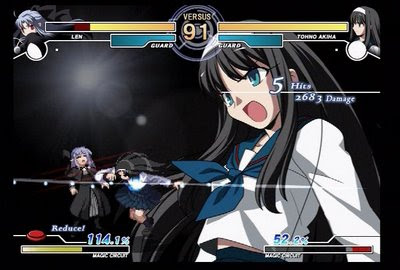 So yeah Ryougi looks plain and nice.
Schoolgirl Akiha looks like she deals 5000 damage off a BnB on someone at half life.
Aka broken as shit.
She stole Warc's blood rings too except they're like...midair!
Posted by Sibby at 5:47 PM 2 comments:
Labels: gaming, MBAA

Rithli does it again, this time for a character he actually likes :3


Seems awfully convenient that the SPY video of all things was leaked, I think Valve is just having fun with the release here.
Posted by Sibby at 7:38 PM No comments:
Labels: gaming, Team Fortress 2, youtube

DAEMON BRIDE...does not look as bad as I thought it would

Sure beats MKV in looks at least.


Posted by Sibby at 1:12 AM No comments:
Labels: DaemonBride, gaming

Uh yeah, what can I say lol.
Maybe it'll be better.
Posted by Sibby at 6:05 PM No comments:
Labels: Big Bang Beat 2, doujin

So Mature and Elizabeth are confirmed in so far.
I bet Rithli is happy considering the types he likes. :V
Posted by Sibby at 1:04 PM 1 comment:
Labels: gaming, KoF

Million Knights Vermillion is terrible!
Suggoi! Arcana Heart 2 PS2 port is terrible!
Yet I am playing these tragedies more than anything else currently.

imaginary_num6er posted a random nico link in chat which lead to a random 40 minute anime OVA thing.
It was...decent, had a premise that caught me.
So I decided to watch it before going to sleep.

Let me explain the term "denpa," or "electric wave."
This term originally was used to describe radio signals or other types of transmissions.
Somewhere along the line it got a hidden meaning of "electric waves fucking with your mind."
I think Leaf? might have been the first to use as an actual basis in a story (Shizuku) where a robot?/android schoolgirl or something was unintentionally giving off electric waves and thus students were cutting themselves up and going insane.
Either way, it came to mean "weird as hell."
As a side note, when this term is applied to music, it means really catchy or infectious hyper music.
Miko Miko Nurse would qualify as denpa music.

So yeah basically, if the title says weird girls, then yes, all the girls are weird.
A relatively normal yankee-looking guy, Juu, just goes about his life, until he gets a note in his shoe locker that asks to meet him under a tree.
And there we meet extremely weird girl number one: Ochibana Ame.
A rather short girl whose bangs completely cover her eyes, she speaks in ridiculously formal Japanese.
She believes she was linked to Juu in a former life and thus has come to seek him in the next as his bodyguard, going so far as to kneel and kiss his shoes.
Needless to say Juu has never met this girl and is completely freaked out.
At the same time, a bunch of murders have been occurring in the town, generally by strangulation.
The rest of the denpa girls are spoilers but suffice to say everyone is pretty weird.
I'll probably watch the other two OVAs too just cause it's caught my attention.

Ok I lied iincho (class president) is not crazy. 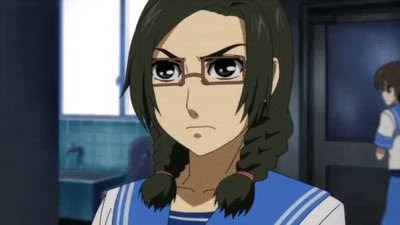 Ame is pure denpa though. 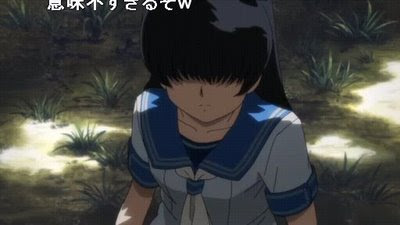 Satsuki is denpa too. 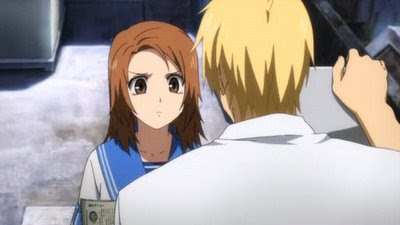 They didn't say anything in this episode but they're friends of Ame, they must be denpa.
Japanese wikipedia says their names are Yukihime and Madoka. 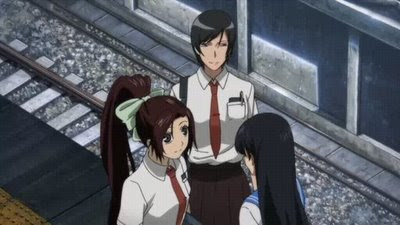 Ochibana Hikaru, weird as her older sister, but in a different way. 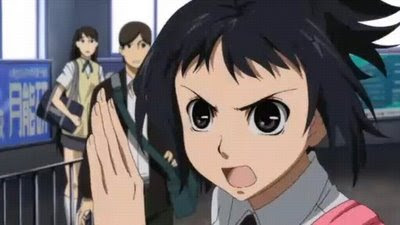