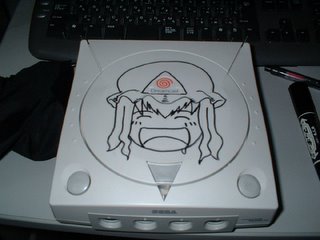 Experimenting with video codecs and compressions

I'm the JUGGERNAUT, bitch!
Posted by Sibby at 1:33 AM No comments: 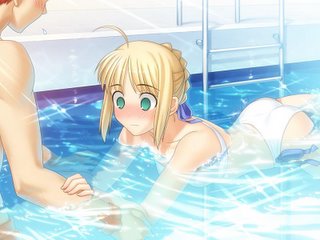 Needs.
More.
Saber.
Love.
Now.
Shirou and Shinji don't fight it out, disappointed.
I want him to fuck Shinji up already.
It's obvious he's a lying evil shit.
Rider is too awesome, hurry up and get your real master already.
Rin...moves in with Shirou o_Oa and managed to piss Sakura off at the same time.
Shirou makes Saber horribly mad (and hurts her feelings whether he knows it or not), so she goes off to fight assassin alone.

If the creators would just SHOW A LITTLE MORE SABER love I could enjoy this show a lot more.
Posted by Sibby at 5:08 PM 1 comment:

The hell.
How could they...do that with my opinions!
ARGH
In short, the first part of this episode basically...removed my hate for Yuuji.
I mean he's a good guy and all, his heart is in the right place, it's just that he made Shana cry.
And I almost forgave the seducer too.
It's like her confession and involvment cemented Yuuji's decision to leave the city to protect it along with Shana (that and he likes her of course more).
In fact, things would have definitely turned out for the better if Yuuji had gone and told Shana his decision immediately.
But, things never go the way you want them to.

Wilhelmina, once viewed as a Yuuji beater and savior, is showing up at the ABSOLUTE WORST TIME.
In short, if no Wilhelmina, Yuuji would go to Shana and say I'm leaving with you anyway, Shana would go, "Really?" with pretty eyes, and then tralala happy fields.
Instead, Wilhelmina steers Shana into believing in the most "effecient" path, duty of flame haze blah blah, that is, kill Yuuji, take Reiji Maigo for themselves so Balle Masque doesn't get it.
STRAIN.
Their relationship was so close to repair, and honestly what some might consider a rather boring first half of dialogue in fact made me like Yuuji again, but gah Wilhelmina!

Ah well, things rarely go smoothly in anime, what can I say?
LET THE YUUJI VS WILHELMINA CONFLICTS BEGIN.
/me waves flag!
Posted by Sibby at 6:30 PM No comments:

Shana 19.
Yuuji is a moron.
Wilhelmina is going to beat the SHIT out of him, and for that I am eternally grateful.
First, it will refocus him back on his relationship with Shana, which he had started taking for granted. (You love her idiot, yet you somehow conveniently ignore it.)
Second, it will make him realize how much of a liability he really is to Shana sometimes. (Learn to fight instead of hiding behind that amulet.)

FSN7
So much Rin love!
Stop ignoring Saber, Shirou T_T
She WANTS to win this thing too you know, it's not like she's just fighting for your sake.
Her wish is a pretty damn important to her!

If you type startkeylogger into irc, people running irc and norton's firewall will disconnect from the internet.
Fun in large channels, however may get you banned if the ops are running norton (Your fault for using that POS really)
Changing your name to startkeylogger is just fucking evil.
If no one is affected, it could mean that everyone in the channel is actually smart and doesn't use Norton!

Also, ahem, Disgaea 2 in JP is out.
We have to wait till August.
Being the impatient person I am, I broke down and torrented the DVD image from some Chinese gaming website.
I will get a fliptop, and then we will see how it goes... (>o<)b

On that note, the voice actress for Rin for Fate Stay Night wrote on her blog that, "Fate Stay Night get! The download is almost finished."
HUGE no no XD.
In short, the voice actress blogs on how she's pirating the game the anime she's starring in is based on XD. (For me that wins some extra points actually =O)
Anyway, it was changed two days later to, "Fate Stay Night get! The INSTALLATION is almost finished."
Most likely her sponsors/company gave her a legit copy for damage control ^^;;;
Posted by Sibby at 1:24 PM No comments: 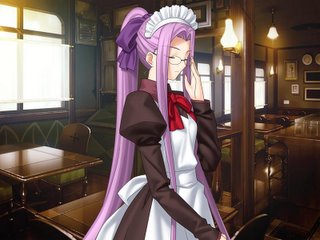 Well, I'm an idiot.
Yeah, FSN was a text heavy game, so a text heavy anime is to be expected.
Thing is I LIKE the text I'm reading, now that I have subtitles.
My poor Japanese fails on the complicated script of Fate Stay Night.

Anyway, Rider wins for BEING relatively nice for a servant under the control of a shitty master.
"I'll kill you gently."
"How brave, you constantly choose the most painful options."
There's some real respect in her voice there when she's fighting Shirou.

Archer, on the other hand, is an asshole -_-
But it's to be expected...cause well he's archer!
He wouldn't be half as bad ass as he is now if he wasn't an asshole! 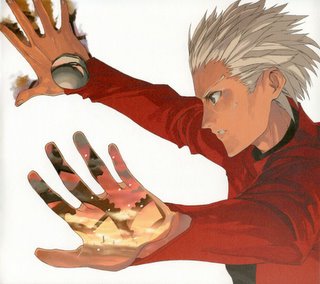 I didn't say abandon it already =O
I just say the general pace is well, I don't know, how have you people found the pace so far?
You've enjoyed it still right?
Don't quit now!

In other news, SCREW YOU SEDUCER, EXCEPT NOW I REMEMBER YOUR NAME AS YOSHIDA MISAKI FOREVER.
And Yuji, you are a dork, stop being so nice.

Everything's coming together wee!
And hey, now I know where Blautsauger went (Marjorie had it).
Posted by Sibby at 9:33 PM No comments:

Fate Stay Night, as I have said already, moves SLOW.
SLOW SLOW SLOW.
The action is pretty good and stuff, but god it has the pace of an audiobook.
Then again the game has a ridiculous amount of text, I think 3000 pages worth or something.
Anyway, Rider has a very nice voice.
Hurry up and die crappy temporary master, bring on the new one already.
Posted by Sibby at 5:43 PM 1 comment:

So at the place where I volunteer, I learned some unsettling news.
Turns out they "let go" the previous network administrator/computer networking teacher last week.
This is troubling for a bazillion reasons:
1. Who the hell is MAINTAINING THEIR NETWORK? From what I've gotten this guy ran EVERYTHING. I don't have passwords to ANYTHING, so I can't help with ANYTHING that requires permissions yet. This is like...ALL the computers (regedit has been disabled, c prompt has been disabled, you get the idea)
2. I don't know if I'd want a job here, and it sort of sneakily sounds like they're preparing me for it? I've been given more and more computer related crap (finally though, I hate data entry) to do, which is peachy, but I'm really really honestly not sure I'd like to spend long here.
3. Currently this is for a recommendation/experience. If I bail out, what happens to that if they really are ninja training me as a replacement =O
Posted by Sibby at 12:19 PM No comments:

Shirou takes a deep dive and just introduces everyone to Saber.
Foreign girl!
Living in my house!
For a while!
Please accept situation!

Tiger goes wtfux, even Sakura is shocked.
Saber says something like, his dad told me to protect him from all enemies.
Tiger's crazy logic dictates they must fight, and if Tiger wins, Saber leaves.
And well... 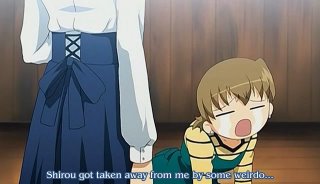 Anyway, Archer really questions Rin's motives, as she is trying to go for the strongest opponents first (someone sucking up the school student's energy), while a weak one (Shirou), is right there.
So Rin decides to off...well more like smack Shirou up.
Their "fight," while dangerous to Shirou, is still ridiculous XD, as Rin is such a silly. 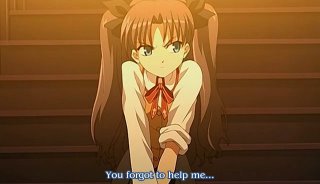 Yes, Shirou did not catch her when she jumped down the stairs AFTER HIM TO ATTACK HIM, so she's mad.
Shirou counters that well...if I helped, I'd have seen up your skirt, which makes her madder.

Anyway, Rider shows up.
Previews are interesting, looks like Rider is currently under the loser's control, not her real master.
So this is really following first branch Fate...
However, I think temporary master will die, and the real one will take its place.
BUT, Rider does give Shirou his first handy dandy excuse to fight it out.
I hope she lives to the end though, Rider's a good girl =D 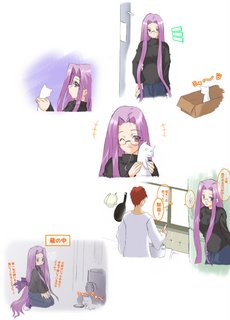 Yes, she has square pupils under her mask.
Posted by Sibby at 12:03 AM 1 comment:

Kamishin aka Tuner Shota aka one more good guy shows up in town.
Silly dork girl will get a bigger part.
Dork girl fans rejoice.
Shana fans boo. (BOO, YOU SEDUCER!)
Anyway...I spoiled my self completely on volume 9's novel.
For the longest time I thought Kamishin was the one going all angry and stabby on page 235, but after reading the surroundings, turns out it's YUJI.
Yes folks, you WILL see an angry crazy Yuji, using Blutsauger (the sword the boy incest twin had) to stab someone.
But uh, it's spoilerific like crazy.
I already told one person -_-a cause I couldn't keep the implications to myself.
It is truly a WTFUX moment.
Posted by Sibby at 2:17 AM 1 comment:
Newer Posts Older Posts Home
Subscribe to: Posts (Atom)
Follow @sibladeko