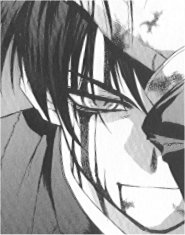 ｷﾀ━━━━(ﾟ∀ﾟ)━━━━ｯ!!
Holy shit I've been waiting on this volume FOREVER.
For the uneducated this is official Tsukihime manga volume 3.
The picture is Shiki from volume 2, when he's gone into Nanaya (assassin) mode.
Posted by Sibby at 8:54 AM No comments: 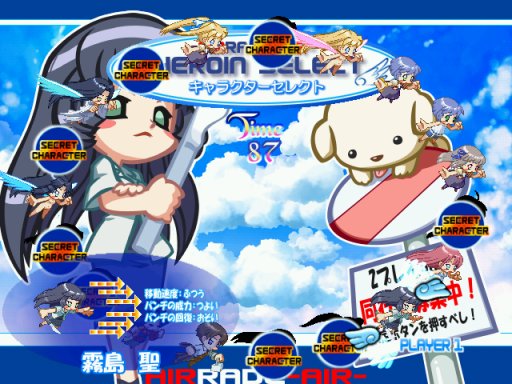 This has been my new distraction for a while, I'm just late in posting because I wanted to unlock more things for that pretty screenshot.

Anyway, it's a sidescrolling shooter with Air characters.
It is hard.
As in "easy" mode is hard.
As in MY FUCKING GOD I HAVE TO BE JAPANESE hard.
Summer mode alone takes approximately 1 hour and 18 minutes to get through, and this is with no heals and only 9 hits before game over.
Yes I used a trainer to get through summer mode, and that's why I have Kanna and Yao Bikuni =D

Hijiri rocks, her knives are amazingly powerful with a good spread.
Winged Misuzu is Misuzu on crack, too good.
Haruko sucks -_-a
I have not played with Crazy Kano/Keisuke/Uraha/Yao Bikuni yet.
I suspect Yao Bikuni is broken as well.

Edit: Holy SHIT Yao Bikuni is amazing.
Her punch FIRES A PROJECTILE THAT STILL COUNTS AS A PUNCH and kills almost everything in one hit.
Her fully upgraded shots form a GIGANTIC CIRCLE around herself before moving out at a target, sort of like a cone. 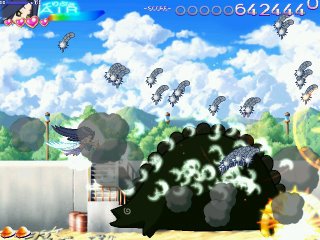 Fresh from the powerbook of another Hollywood hack! I want to work at a theater. Just so I can punch the face of every last man, woman, child, and invalid that goes to see crap like this. I don't discriminate who I'd sucker punch. Equal opportunities... FOR PAIN. Unless they're much bigger than me. Then it's just a stern fist shake... When they're not looking. Naturally.

Edit: Link updated, hopefully it works now. Warning, Rapidshare ahead.
Posted by Sibby at 6:28 AM 2 comments:

Impatience is the devil. 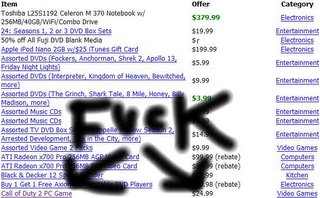 So I finally caved in.

Random thoughts:
The Thompson is ridiculous at small-medium range.
I can not snipe for the life of me.
I am totally unsure if there is leading at far ranges, as I haven't HIT anything at far ranges yet.
Search and Destroy is ridiculously hard for me as of now.
Shotguns are powerful.
Posted by Sibby at 2:24 AM No comments:

Wow, Sony is STUPID upon stupid.
Remember the CD protection that allowed people to install malware without tripping anti-viruses?
Turns out LAME source code was embedded deep within the copy protection.
LAME is open source under LGPL (not GPL), and by open source I mean if you use the code, you have to make your application open source.
So basically Sony used it without permission.
Posted by Sibby at 2:48 AM 1 comment:

KBILLY's super sounds of the '70s just keep on comin...

Reservoir Dogs is an awesome movie, the soundtrack only used '70s music, but there's something infectious about the entire soundtrack.
I think it's all the horns and trumpets and real instruments blaring like crazy along with the ragged guitar.
I'm a sucker for real band/orchestra instruments.

I heard Creed's cover of Magic Carpet Ride before I heard the original one by Bedlam.
And of course you have Stuck In The Middle With You, which puts you in that oh so fun homicidal mood.
"Clowns to the left 3SKBITCH of me, jokers to the right WTFUSELESSHOG, here I am stuck in the middle NOIDONTHACK with you."

I find it amusing that centrist political bloggers like this phrase enough to make up more than 70% of the first page hits when googled (the phrase, that is).
Posted by Sibby at 7:28 PM No comments:

In short, I had found a script ripper app on an obscure but still updated JP website.
However, it was for the CD version, not the DVD version, so I emailed the guy asking if there was DVD version.

His reply basically says no DVD version, and no plans to work on one at this time due to the differing formats of their ..a files (compressed txt files).

Slowly but surely converting the layout.
Frikkin rounded corners are built directly into the gifs half the time.
Ugh.
Also, I need adobe photoshop back -_-
Posted by Sibby at 4:56 AM 1 comment:

Wish I had a script rip, it'd make things so much easier than doing it myself.
Posted by Sibby at 8:24 AM No comments:

I don't mean he claims to be. I mean the military says so. It held a secret tribunal and ruled that he is not al Qaeda, not Taliban, not a terrorist. The whole thing was a mistake: The Pentagon paid $5,000 to a bounty hunter, and it got taken. The military people reached this conclusion, and they wrote it down on a memo, and then they classified the memo and Adel went from the hearing room back to his prison cell. He is a prisoner today, eight months later.

via Mefi, which shows it CAN be useful sometime.

Oh yeah, absolutely fucking horrifying.
I hate to say it, but I'm glad I'm not a Muslim in this day and age.
Posted by Sibby at 7:54 AM 1 comment:

You lose Kansas.
Heck, even the pope supports evolution over intelligent design.
Now excuse me, I have to set my calendars back one hundred years or so.
Posted by Sibby at 8:40 PM No comments:

Found a new diversion, a site to throw your uncreated ideas/inventions around.
There are actual practical ideas, and then there are the slightly insane people ideas.

Antivertising is one of the latter.
Slightly insane people to look for are wagster, benfrost, 2 fries shy of a happy meal and squeak (who writes everything in limerick).
Posted by Sibby at 4:02 AM 1 comment:

If you were "in the know" you'll notice I've updated the right side with a link to people's Soul Calibur 3 character creations, including my own.
I only have two at the moment, Unlimited Saga's Laura and FF4's Rydia.
I think I'll post Last Blade 2's Hibiki next.
And then...I might be stupid enough to attempt Stephen Colbert.
Posted by Sibby at 9:13 PM No comments:

Hello Kitty has a pet cat.
This strikes me as wrong on no less than two levels.
Posted by Sibby at 8:22 PM No comments:

Glitch on the level of Roll Cancelling found in SC3

G225, G885
I don't really think this makes everything dead.
First off, you have to basically EXPECT a GI.
No one expects a GI really, but how many people expect Re-GIs?
At high play, a lot.
The Re-GI wars were hilariously annoying, this cuts down on them.
Honestly Kenny learned to GI my Talim pretty quickly, I'm sure if I learned to Re-GI consistently it'd get stupider.
I think it actually gives the initial GI-er an advantage, cause unless you FULLY BAITED A GI (i.e. mindgame aka depth), you're not going to expect it.
And when you try to counter with a GI of your own, they will buffer with G225 and retain advantage.

I have yet to make judgement on the ability to G225 out of stances and throw escapes.
Stances still unsure...throw escapes well...it's like punishing a throw with an anti-throw.
I think it's more mind games again .
(Have to guess right first, then perform the buffer input, then counter with something that will hit fast enough)

I think though this will make high level SC3 very hard for me to even crack -_-a
Like roll cancelling, I still can't do that shit reliably.
Posted by Sibby at 1:08 AM No comments:

Behold the son of EAT YOUR JAM!
EAT YOUR JAM 2!
Posted by Sibby at 6:20 AM No comments:
Newer Posts Older Posts Home
Subscribe to: Posts (Atom)
Follow @sibladeko