There will probably be 900000 vids of it so I'm not recording.
Let's me go faster and enjoy it more.
Game's freaking amazing.

Also, TOHGEKI 2 replays were released.
I'm in a dilmena here.
Only solution is to BEAT ODIN SPHERE ASAP.
And then record and upload Tohgeki 2.
Posted by Sibby at 12:43 AM No comments:
Labels: gaming, IaMP, odin sphere

The place is pretty huge, I didn't know there was a downstairs.
Anyway, MBAC, I got kumuhands.
Suddenly I could not do a bnb.
It made me a sadpanda.
Tourney wise I killed two players worse than me before losing to I think...Zaeler then Dippy.
Blah I need my stick.
Spooky got randomed out by Ciels (Damian and Andrew).
XAQ got randomed into losers by Zaeler before getting mad and crushing everything in his path.
Tinshi showed up late and entered 3s (it was teams).
Somehow he got third.
Arturo and Flare got second.
Mutant and Justin Wong (Using ghetto Yun now), got first.
Damn 3s.
Posted by Sibby at 6:55 PM No comments:
Labels: 3s, gaming, MBAC

HELL YEAH, IT'S ABOUT TIME.
Gameplay vids from gametrailers.
Posted by Sibby at 10:35 PM No comments:
Labels: gaming, starcraft

Zepy: do you know new exciting system has been recently implemented into RO2 Zepy: it allows guys to lie down on girls' laps 7:47:09 AM Zepy: and innovative feature lets the guy have an action where he touches the girl's hair while he is lying on her lap 7:47:45 AM Zepy: and another even more innovative feature lets the girl point at the guy who is lying on her lap and say "what the man you are~"

Scarlet Weather Rhapsody looks like to be Iamp 2, standalone and being built from scratch.
The screenshot is depressing ugly however.
It takes place after Bunkachou but before Touhou 10 (The newest one.)
AYA HAS TO BE IN IT.
DIBS ON AYA.
Posted by Sibby at 4:53 PM No comments:
Labels: gaming, IaMP, Touhou

James Chen (among many) tells it like it is.

For those of you who haven't been rolling with the Showdown lols, basically Emogear's "Showdown" tournament and upcoming SBO qualifiers have been caught by drama llamas after quite a few people had problems with how Showdown was run.

The entire thread is sort of a civil point counterpoint style, with some flames but everyone trying really hard to keep their patience.
What's ticking everyone off is basically:
1. If showdown is an example of what type of tournament Emogear will run then why the fuck does he control SBO spots? (Yes, people have still not been paid.)
2. His rule 7 basically states that if he doesn't like you you're not going to SBO even if you qualified.

Tons of arbitrary bullshit, everyone now knows that Showdown was basically an attempt to get Texas, and specifically PZ players, to Japan, not any sort of team USA effort.
Thing is it FAILED spectacularly.
Out of staters won everything and now Emotiongear is dragging his feet.

Arturo in particular really wanted to flame Emotiongear down to the ground, but Emotiongear holds the SBO spots for Arcana Hearts, and thus his tickets, so he really couldn't post his full opinion at all for fear of reprisals.

Anyway the tide is turning.
Arturo learned Empire is backing him; even if he doesn't get the qualifier spot (because of llamas) Empire will send him to the last chance qualifier in Japan.
Arlieth and John Choi have also stated (not in the thread cough) that they will back Arturo.
SRK mods are posting like crazy in the thread (they are also backing Arturo *political maneuvering*)
Unfortunately Aruturo still didn't let loose cause Arlieth played nice guy politics, it'd be bad form if he flamed (too easy.)
But he did lay his cards out on the table and basically say, "You have jerked us around, and I'm not happy about it."

Anyway Emotiongear pretty much does not answer Sabin and goes and attacks ChaoticBlue in the thread because it's an easier target.
Then jchensor shows up and tells it straight.

Suicide is the second-leading cause of death for Asian-American women ages 15-24.

I'm not sure if this is a completely random story/study or what not, but it's sort of depressing.
Posted by Sibby at 9:25 PM No comments:
Labels: news

All that's known is that it's a fighting game of some sorts and is going to be shown at Reisaitai on May 20th.
GET HYYYYYYYYYYYYYPE!
Posted by Sibby at 1:29 PM No comments:
Labels: gaming, IaMP

If I ever went to hell, I'm sure I would be forced to play a platformer by the name above.
Dragon Shadow Spell's jumping puzzles are the WORST.
EVER.
NO CONTEST.
Whoever designed them must have been on crack, cocaine, heroin, and dust at the same time.
Posted by Sibby at 11:33 PM No comments:
Labels: gaming, rant 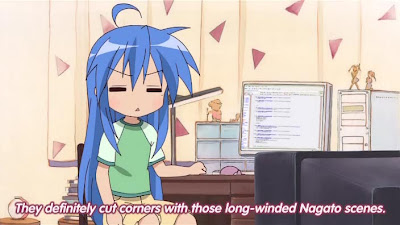 Ray Nakazato is the president of Feelplus, which is currently working with Sakaguchi on Lost Odyssey. Lots of honest stuff in the interview, it's rare to see a Japanese interviewee be so frank.
Posted by Sibby at 10:33 AM No comments:
Labels: gaming

Whoever programmed that thing was on drugs or a monkey.
Seriously, every time a patch or update rolls around I get multiple people calling about svchost 100% CPU usage and being unable to do jack.
The rub is it's not even wasting all that CPU installing updates.
It's wasting it trying to FIND them.
Posted by Sibby at 9:32 AM No comments:
Labels: rant

The 070427 entry is pretty bleak.
"This isn't a forward facing difficult journey, I feel we are going backwards."
And a winner of a line:
"I feel like I am being punished for past sins."

Anyway lines 8 and 9 basically say that they probably won't make the end of June release.