So I had to work Memorial Day Saturday just for stuff, 8pm-1am, after I went home I marathoned Puella Magi Madoka Magica.
Keep in mind this series has been finished for a while now, though I still waited till it was entirely finished because I had heard the scenario writer was good old Gen and didn't want to get episode blocked by earthquakes.
I was pretty spoiled on certain aspects of it by then also, almost impossible to avoid on the JP blogs I read.

That being said all I did was cry a bunch while going through it.
Pretty...amazing.

Maybe not subtle, but they accomplished a lot in 12 episodes.
Posted by Sibby at 2:24 AM No comments:
Labels: anime, Madoka

Posted by Sibby at 10:49 PM No comments:
Labels: anime, Madoka, what, youtube

"Prison bosses made more money forcing inmates to play games than they do forcing people to do manual labour," Liu told the Guardian. "There were 300 prisoners forced to play games. We worked 12-hour shifts in the camp. I heard them say they could earn 5,000-6,000rmb [£470-570] a day. We didn't see any of the money. The computers were never turned off."

Surreal.
Posted by Sibby at 12:05 PM No comments:
Labels: China, World of Warcraft

5. Baiten senshi (our part time warrior)'s first half of her introduction is cut out. The two main story points lost from this are:
a. Mr. Braun wasn't actually advertising for a part-timer (I mean no one even buys anything), but Suzuha actually begged him over the phone for the position when she called.
b. Two lines get said in the VN but not the anime:"I don't know anything about this organization or whatever, but if anything troubles you I can take care of it." Not only that but the line after basically says "This includes dirty work." The tone sounds like either offering assassination services or bodyguard work.

6. Okabe learns of John Titor on @channel through his phone. The posts show that "John" has no knowledge of Akihabara slang (so kwsk and w and such are lost to him). He also learns of John Titor's disappearance from the year 2000 through searching on his phone, not the computer. Not only that, he is reasonably well-versed in Titor to know what a IBM 5100 is already.

7. Moeka shows the picture of the IBM5100 to him and he asks what is that, she replies "An IBM5100." She ALREADY knows what it is. Not only that, Okabe already knows what it is as well and replies with, "The computer John Titor's looking for?" Keep in mind that in this world Titor just appeared on @channel, so honestly no one should know about IBM5100s in detail or be looking for them.
Posted by Sibby at 7:27 PM 1 comment:
Labels: Steins;Gate

That's not to say they are doing a bad job.
It's just that the novel has so much stuff crammed into little corners that they probably couldn't keep it all.
The figure I kept hearing was "50 hours of text," so try to put that into 24 episodes of 30 minutes each and well yeah.
Anyway this will be updated semi-regularly.

1. I am 99% certain that the girl on the rooftop preshift (before the first worldshift) waving off spectators from the roof explosion (where you see an intact device), is Baito Senshi. In the anime it shows someone with a hat over their head making an "X" gesture with their arms, in the VN however you hear her voice, although the scene is not drawn. It sounds like her a lot, the anime seemed to exchange "sounds like her" for "looks like her."

2. When Chris first asks Okabe preshift in the anime about what he wanted to talk to her about 15 minutes back, she says the phrase "it sounded really important." Literally, the phrase was more along the lines of "your face looked really anxious." However in the VN, Chris says something more along the lines of "you looked like the world was about to end, and were about to cry." To me this is a pretty huge distinction in depiction of an emotional state. It conveys a sense of desperation.

3. The first banana experiment actually ended up with the bananas being frozen. This is because Mayuri had put them in the freezer, and then they had removed them to thaw and then warm them up. Of course, this royally fucked up all their future analyses, because they couldn't recreate frozen bananas. Instead they got gel bananas, so they were wildly grasping at straws such as "change in density" (Okabe even says isn't that what a normal microwave does anyway!?)

4. Okabe actually visits the shrine (the first time we are introduced to Ruka) because he semi-believes he is possessed. This is because not only is Chris not dead, but she is vigorous enough to crush him in an intellectual debate. Of course he's half joking here and the whole evil arm thing is just having fun with Ruka.

Theory Fighting:
I'm doing all in my power to avoid spoiling myself ahead of time, but these opinions will contain spoilers as I progress further in the anime/VN of course.

1. Baito Senshi is on the rooftop with the device? satellite? as this story begins.
2. Chris's life or death effect on any timeline is huge. This is evidenced by when the first shift happens, John Titor disappears more or less from the year 2000, and a satellite crashes into the conference hall. To get more of an idea of her importance however, consider an example of where you went back in time and saved the inventor of the time machine. This means her butterfly effect is huge, if it was small, there would be no way a further event in the past would be completely changed, but it was.
3. Okabe's first message about Chris's death saved Chris from dying. However, it might not have saved her directly, but through butterfly effect. I believe this because something is not right about the supposed first time Okabe talked to Chris. The chronology goes something like Okabe tries to desperately talk to Chris, gets interrupted somehow, then 15 minutes later Okabe meets Chris again but has no memory of their previous discussion, then Chris dies, then first world shift from the text. Given the rules of how their text time machine works, what should have happened if it had saved her directly was 1. Okabe never talks to Chris or never enough to catch her attention 2. Chris dies 3. Okabe D-Mails 4. Timeline changes to one where Okabe gets a text from the future, has talked to Chris, and has prevented it. 5. World resynchs and Okabe doesn't remember 4.

One of the frustrating (or intriguing, and I find it clever) features of Okabe's time travel memories is that every time the world shifts they are more or less false. This means that he has to figure out what HE HIMSELF has been doing in the new timeline from the point of change up until he resynchs with the new timeline.
This is why the first occurrence of non memory is odd. Normally when Okabe has no knowledge of what he has been doing, it is because a new timeline has been created, and Okabe "synches in" after a period of time has passed with no knowledge of anything from the point of change up until his synch moment. In this first situation however...there is no synch in. Flat out, Okabe is listed as having done something he has no memory of, but there is no synching in, he is perfectly aware of what he has been doing (walking around with Mayuri) up to that point, there has been no shift, he is not stuck in limbo, he is in control of his faculties.

To me this points to the "15 minutes ago" Okabe as actually being a physically different Okabe, rather than an Okabe who has been given a text from the future. Which implies at some point that the lab gets access to a physical time machine.
4. Baito Senshi is from a future where Chris fucks up (not hard to make this hypothesis.)
5. Moeka did not send the message she said she would (to not buy a new phone 4 days in the past) This is a strong guess because neither Okarin nor any of the lab members actually look at her text before she sends it, and also the results of the message have a surprisingly high change factor.
6. Probably obvious, but Okabe is actually really self-aware of his idiosyncrasies, but enjoys them anyway. I can't really call him delusional or insane. 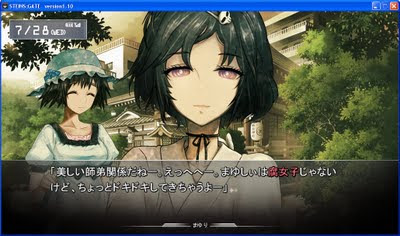 I Have Few Friends character design, lost in transition? 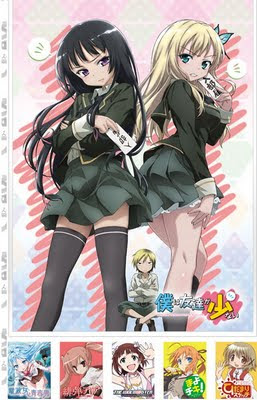 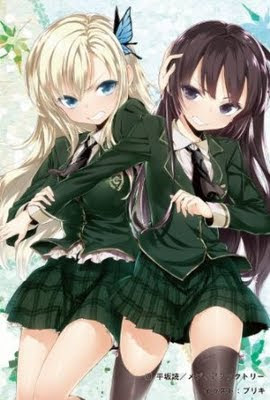 Some people are sort of annoyed that the anime version of Boku ha Tomodachi ga Sukunai's character designs are done by the Denpa Shoujo guy.
I don't know, the original designs, while amazing, feel really hard to animate easily.
Posted by Sibby at 10:04 AM No comments:
Labels: anime, Boku Wa Tomodachi Ga Sukunai, manga

Shaming us on twitter!
Good Heavens!
Posted by Sibby at 9:37 AM No comments:
Labels: comcast, humor, twitter

I Have Few Friends gets an anime

This series was pretty quirky and funny but not remotely finished.
When it got a drama CD I was intrigued though by the voice choices because that usually signals who is going to play who in the future if an anime comes out...and they had some serious star power. 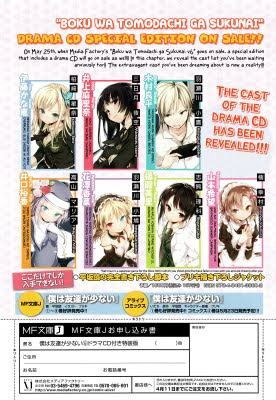 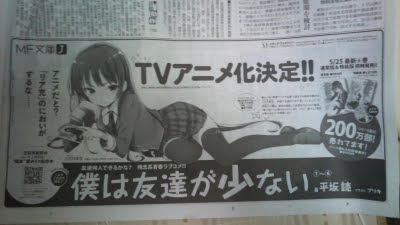 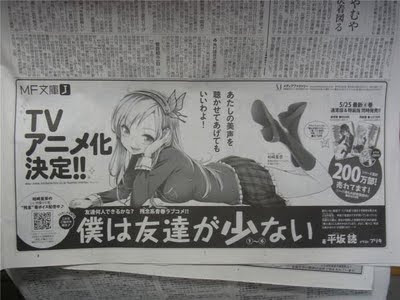 So a 7th Dragon prequel was announced for the PSP and wait what? 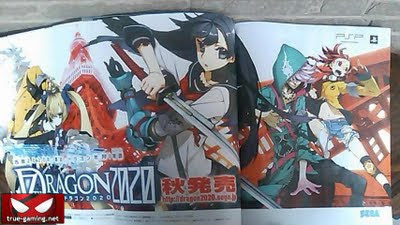 Is that fucking Tokyo Tower I see?
Did someone mix up my 7D with TWEWY/Persona nonsense?
Posted by Sibby at 11:22 PM No comments:
Labels: 7th dragon, gaming

Cheerleader Has To Pay $45,000 To The School That Kicked Her Off The Squad For Refusing To Cheer For Her Rapist

Ugh, rage article of the day.
So I think arguing this on first amendment grounds probably fails but...at the same godamn time:
"You speak for the school, and the school promotes former rapists, and if you don't believe in that, then you're off the team!"

The worst part is none of the lower courts said the suit was without merit and dismissed it.
Meaning the Federal Appeals court is GOING OUT OF ITS WAY to screw her over.
Posted by Sibby at 1:01 AM No comments:
Labels: rant

Some notes:
Mods are more about addressing weaknesses then amplifying strengths in this game early on.
Mana Amp is always solid.
Rapid fire helps a lot on slower knockback weapons.
Same with quick reload on slow as hell rocket launchers.
Increased accuracy I find useless.
High capacity is generally solid, at low levels it won't increase a clip size of 1 above 1, but the higher levels it will, which can make it worth it on certain one shots.
I'm not really feeling high-explosive rounds.
I guess long barrel could be mildly useful on assault rifles, but I got a demon gungnir early, so...
Accelerated long barrel is a double mod so it's good
Early on vampirism is good, later difficulties it is useless.
Life Amp is ehhh.
Shield is ehhh as well.
Someone on JPBBS reports Last Draw 2 increases Demon Gungnirs last shot by about 3x. (12k)
Piercing is amazing. Even level 1 (pierce one enemy) is useful with the right weapon.
Burst is decent, sort of like a ghetto pierce. If you combine the two however you can have some real fun.
Limit remover is generally good because accuracy isn't that important.
High Seeker I've only seen on a single gun. 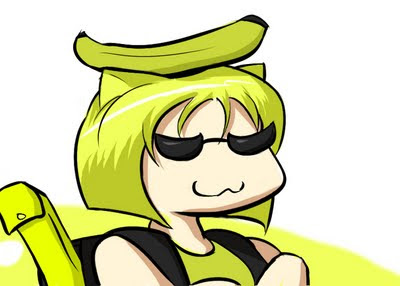 Needs no explanation.
Posted by Sibby at 12:15 AM No comments:
Labels: Arcana heart 3