Ah ha what?
They made them female?
Posted by Sibby at 11:11 AM 1 comment:
Labels: anime, Utawareru Mono 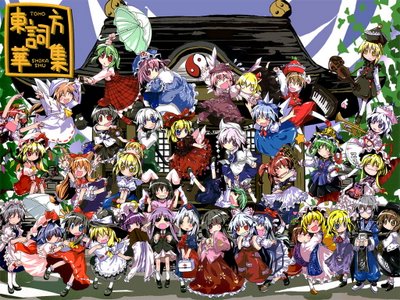 Posted by Sibby at 4:36 AM No comments:
Labels: Touhou

This is the show that's replacing Haruhi's timeslot.
After the completely wtf first episode (They don't explain that he's been on drugs in the show) I went to go find manga.

You could say it's about otakus but not really.
Rather, it's more about different types of hikkimoris/social recluses/shut-ins/outcasts and how they cope.

From our jobless main character Sato who can't deal with other people looking at him or talking about him, to his next door otaku neighbor Yamazaki who is bitter against all women and views H-games as "Rape them in your head" revenge, to his former iincho classmate Kobayashi who has to care for a brother who plays FFXI all day and thus completely hates the weak-willed and has taken up a role in a multi-tier pyramid scheme to hurt people on the lower end, to his former senpai turned officelady Kashiwa who steals and uses tons of psychidelic drugs and hates her life, and finally to his "angel" Misaki, who can't tolerate and skips school and who is delighted to have found someone worse than her to help so she can have meaning in her life.

It is definitely for 18+, perverted as hell, darkly funny to the point of tears, and so honest it hurts.
The manga is a complete diarama of extremes of despair and hope...and you see the vicious cycles these people build for themselves.

In terms of the characters, Sato's pretty normal compared to the rest.
He dropped out of college cause he couldn't handle the people around, and he basically sits in his apartment all day taking drugs his former senpai passes him and going completely trippy while listening to the godamn loud anime music next door.
Is able to sympathize with people who suffer as much as him or have their own problems, is completely unable to relate to people who have normal or happy lives.

Yamazaki's dream is to make a super H-game, his family wants him to take over the business but he saved up and left anyway for vocational school, he has lost a lot of his trust in the real world and corrupts Sato quite a bit (2d pron/otaku), but honestly their friendship is really strong and their dream (Sato and his) of creating an H-game of H-games is sometimes all that they've got left when they hit rock bottom.

Kobayashi is a different case, as she herself is not a hikkimori per se but she is 5 million in the hole because she has to care for her MMORPG-playing brother and because she got tricked into the pyramid scheeme; she's forcibly deluded herself into believing that her career of squeezing from the trash to feed trash is better because it's screwing over the ones at the bottom and she's so good at selling this bullshit to others because she targets people who are caught just like herself.

Kashiwa generally hates people, she works in a doctor's office so she is constantly on drugs and giving Sato drugs, has wanted to kill herself multiple times, it's really unsure if she likes Sato though she has said she only felt like herself with him back in school when they'd talk, she gets married (to someone else) and manages to stay sane for a little while until she flips out again.

Misaki starts off as Sato's "savior", decides to view Sato as a personal project of rehabilitation because in her words, "I have found someone worse than me," but it becomes quickly obvious that she hurts as much as she helps, stalker mentality (has Sato's phone tapped), needs him badly to make herself feel better, does not go to school herself because she hates all the people there, a rather scary character as she has no moral compass to guide her attempts to "cure" Sato because in the end its out of her own desire to feel good.

Definitely not everyone's cup of tea, it'll probably offend 90% of the people I know.
Still it had a powerful impact on me.
It's like watching a sad mad schizophrenic play where the characters have all lost their goals in life and keep colliding on the way down.
Posted by Sibby at 2:08 AM 1 comment:
Labels: anime, NHK

Oh god, too good.
Posted by Sibby at 2:12 AM No comments:
Labels: Touhou

It's an hour long, so I didn't think I'd stay the whole ride.
But it's fascinating, and it also sort of makes me wonder why the hell I ever bothered to watch Television Network News.

Spin
Posted by Sibby at 2:05 AM No comments:
Labels: news, politics

Those Japanese and their crazy fake American accents imitating bad Japanese accents.
Or something.
Actually I'm half convinced they just hired an American dude. 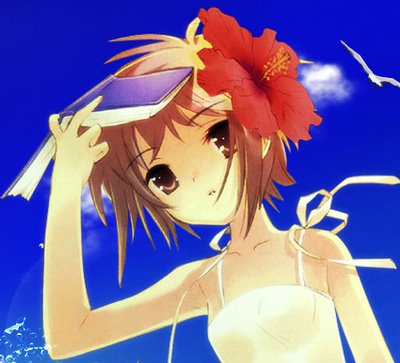 See one of the things about Haruhi is I honestly like her the least out of the rest of the female characters.
This includes Kyon's sister and Tsuruya.
That's not to say I hate her, or even dislike her.
It's just that I like her the least.

I have had problems with the tsundere character type, it can be done well, and it can be done horribly.
Horribly would be Love Hina, which has a fucking psycho bitch as the main girl, or her counterpart in Negima (Which I admittedly tolerated for a lot longer than I should have), or Ranma 1/2.
Well would be...Rin/Saber from FSN, Suiseiseki from Rozen Maiden, or admittedly Shana from Shakugan no Shana.
Most tsundere characters are also rather lacking in intelligence.

Haruhi is...well she'd rate decently if NOT FOR THE UTTER SUPERIORITY of the portrayal of the other two character types around her.
The types being "Silent-girl" and "Childhood friend/devoted/sister."

Nagato Yuki is a "silent-girl" type, one could argue a Rei (Evangelion) clone.
Except Yuki is honestly flat out more awesome in every way.
No crazy tragic past of cloning and no giant robot to pilot, but there is something amazingly appealing about Yuki that makes her my favorite character in the entire story.
Perhaps it's her fight against Asakura.
Perhaps it's her completely destroying the computer club single-handedly at real time strategy battleship.
Perhaps it's her completely deadpanning guitar riffs in a witch outfit in the awesomest bit of animation evar.
Perhaps it's all of that combined with her changing personality from non-human to a really sweet girl.

Asahina Mikuru is the "childhood friend/devoted/sister" type.
If you notice her voice actor, she's basically played the same role a whole shitload of times (Kaede in Shuffle, with a twist =D, or Cierra from Riviera, or Hiyori from Mizuiro)
Mikuru is like...fanservice personified; we know it, it's listed episode two (Volume one) on the dotted line.
Is this bad?
She does it in such a way that she's utterly adorable everytime I see her, and somehow doesn't get old.
And you're talking to someone who has seen a lot of crappy fanservice (Hi Love Hina/Tenchi Muyo/Anything by the guy who did I's/Divergence Eve/Green Green/Da Crapo/etc)
Plus her chemistry with Kyon (To a lesser extent Haruhi) is absolutely a joy to watch.
While Nagato is my favorite character, Mikuru x Kyon is probably my favorite pairing.

Which brings us to the final point...
I know the pairing listed above probably won't happen, but it's almost infuriating to think of the REASON it won't happen, namely, HARUHI WILL COMPLETELY DESTROY THE WORLD if it does.
It happens in episode 14 when she flirts with him and it happens when they play baseball.
It just strikes me as sort of unfair.

Anyway, the episode flat out ruled, even being a Haruhi episode.
Wraps up season one nicely.
Also, you can assume that Haruhi completely did not believe what Kyon said at the end of episode 14, as she's still completely oblivious.
I'm sort of curious how season 2 will pan out, seeing as they've nailed all the short stories and basically only have long arcs left.
Hopefully they'll be done well. (3 years ago arc, world w/o Haruhi arc, summer arc.)
Posted by Sibby at 10:19 PM 1 comment:
Labels: anime, Haruhi

Definitely third best in the game.
All her weaknesses can be solved by hitting the enemy three times and killing them off.
Did I mention I bloody hate fighting Yuyuko?
Irony then that our first Japanese visitor to silly old #Iamp uses the fat ghost of 4K+ damage.

Also, this video makes me angry.